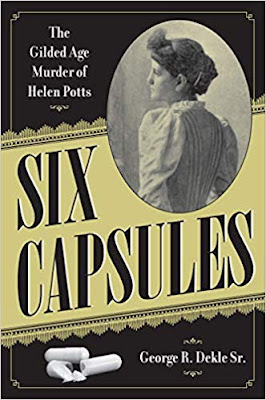 George R. (Bob) Dekle, Sr. has done it again. He has written Six Capsules:  The Gilded Age Murder of Helen Potts. It is another splendid book by Bob—this time a “true crime book” that recounts the poisoning of Helen Potts by Carlyle Harris and the high profile murder trial of Harris in the late 19th century.

Bob’s prestigious list of prior books, among others, includes: Cross-ExaminationHandbook: Persuasion, Strategies, and Techniques (which I co-authored along with William Bailey); The Last Murder: The Investigation, Prosecution, and Execution of Ted Bundy (2011); The Case against Christ: A Critique of the Prosecution of Jesus (2011); Abraham Lincoln's Most Famous Case: The Almanac Trial (2014); Ted Bundy, Celebrity Slayer (2014 Kindle ed.); The Lindbergh Kidnapping Case: A Critical Analysis of the Trial of Bruno Richard Hauptmann; Chronicles of Crime and Criminals: Thirty Two Years in the Courtroom (2017 Kindle ed.); and Prairie Defender: The Murder Trials of Abraham Lincoln (2017).

New York assistant district attorney Francis L. Wellman, who prosecuted Harris, was a familiar character to Bob Dekle because Wellman wrote the second best book on cross-examination entitled The Art of Cross-Examination, second only to Bob’s Cross-Examination Handbook. Notable is the fact that The Art of Cross-Examination is still in print, and, despite its somewhat archaic language, it is still filled with excellent advice regarding how to conduct cross-examinations.
A highlight in Six Capsules is Bob’s description of Harris’s cross-examination of a defense expert witness Dr. Horatio Wood along with Bob’s observations about how Harris conducted the cross. Carlyle Harris was a young medical student who was alleged to have poisoned Helen Potts with morphine to prevent disclosure of the fact that he had convinced her to secretly marry him under assumed names.
Dr. Horatio Wood of the University Hospital in Philadelphia was the defense witness expert upon whom the defense case rested. On direct examination, Wood in essence testified that given that the body had been embalmed and buried for a length of time, it was not possible to determine the cause of death and that her symptoms were “compatible with various conditions.”
I can’t do justice here to either how Bob describes Wellman’s cross of Wood or Bob’s analysis of Wellman’s strategies and skills as a cross-examiner. Suffice it to say, Wellman did the following:
·      Challenged Wood’s opinion that morphine poisoning could not be diagnosed based upon symptoms.
·      Took advantage of Wood’s assertion that a definitive diagnosis could not be reached based upon symptoms but a physician confronted with them would come to a working diagnosis she had been poisoned.
·      Attacked Wood’s qualifications—Wood had seen only one case of morphine poisoning and that was 20 years before the Harris trial.
·      Examined Wood with a portion of his book in which he stated: “I have thought that inequality of pupils is proof that a case is not one of narcotism; but Professor Taylor has recorded an instance of opium-poisoning in which it occurred.” Then, Wellman confronted Wood with the fact that Taylor’s case involved a man with one eye. (This was followed with laughter from the spectators.)
·      Wellman concluded with “You may go back to Philadelphia, sir.”
Bob Dekle is a meticulous researcher, and he reported what the newspapers said of Wood’s trial performance under Wellman’s cross, as follows:
“The Herald reported that when Jerome dismissed Wood from the witness stand, the doctor ‘hurried away from the witness stand with that pained expression sometimes visible on the face of a picnicker who sat on an anthill.’ Upon Wood’s return to Philadelphia, he remarked that he had ‘gone to New York only to make a fool of himself.’ . . .”
To get both the full enjoyment of a true crime history book and insights into effective trial practice, particularly cross-examination, read  Six Capsules.