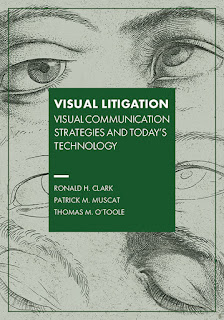 Beginning this Summer Seattle University Law School will offered an online course entitled “Visual Litigation and Today’s Technology." Cross-examination visuals were featured because visuals can be extremely powerful weapons for cross-examination. They can be used to gain concessions supporting your case theory and undermining the other side’s case theory.

“Visual Litigation and Today’s Technology” is a 2-credit course that I taught. It was so popular that another section was added. In this Visual Litigation and Today's Technology online course, students interested in litigation learn how to integrate technology into their trial visual presentations. Just as visuals and technology have become a centerpiece in modern life, they also are the centerpiece in trial. Judges and jurors expect lawyers to use visuals with today’s technology.

The course is taught in the context of mock civil and criminal cases, giving students simulated real-world experiences working with visuals and cutting-edge technology. This experiential course allows students in role-play assignments to plan the cross-examination of witnesses with visuals.

This course is comprehensive in its exploration of visual communication strategies and technology, including, among other topics: the ethical and legal boundaries to what visuals may be displayed in trial; evidentiary foundations for visuals (animations, demonstrations, laser scanner images and so on); visual advocacy in both a pretrial venue and a courtroom, from opening statement through closing argument; the creation of visuals; litigation software, such as Sanction, TrialPad, and SmartDraw; and meeting the trial judge's expectations of a trial lawyer's competency when employing technology.

The text for the course is my new book Visual Litigation: Visual Communication Strategies and Today’s Technology, which is being published by Full Court Press, the publishing arm of Fastcase. The text offers examples of how visuals were used on cross-examination in notable cases, such as Abraham Lincoln’s cross-examination with a Farmer’s Almanac or the prosecutor’s cross-examination of Richard Hauptmann in the Lindbergh kidnapping/murder case with a ransom note and Hauptmann’s diary.

My co-authors are Thomas O'Toole and Patrick Muscat. Tom is the President of Sound Jury Consulting, and he has practiced across the nation for over fifteen years in nearly every field of litigation. Pat is an Assistant Prosecuting Attorney and Deputy Chief of the Special Prosecutions Unit in Detroit where he has tried over 100 homicide jury trials using courtroom technology. 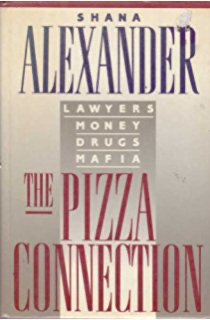 You may have missed this illustration of how to extract the truth or make the witness look witless when it was first discussed here. It bears repeating.  The Pizza Connection case provides a stark example of how a witness’s testimony can be exposed as comical if the witness refuses to provide the truthful answers. The Pizza Connection case was a mega-trial involving 18 defendants who were charged with a $1.6 billion heroin smuggling and money laundering that stretched from Brazil to small pizzerias in the Midwest. Trial lasted from October 24, 1985 to March 2, 1987.

The following is an excerpt from Shanna Alexander’s book The Pizza Connection: Lawyers, Money, Drugs, Mafia 318-320 (Weidenfeld & Nicholson) (1988) in which she describes United States Attorney Robert Stewart’s cross-examination of an alibi witness and it’s a gem of a cross:

(Defense counsel) Larry Bronson’s defense of (defendant) Sal Greco is focused on his client’s need to prove that he was not in a Bagheria farmhouse in early March 1980 watching a heroin quality-control test. Bronson will show he [Greco] was quietly, busily at home in New Jersey. He calls Greco’s good friend and tax accountant, Justin Pisano, a man who keeps detailed date books.

Under patient examination by Bronson, the witness goes through a precise account of driving to the Jersey Shore three Sundays in March to go over Greco’s accounts and to visit nearby pizzerias with his client in order to compare their business with that of the Greco pizzeria in Neptune City.

Stewart’s cross-examination of Pisano becomes this prosecutor’s finest hour. He concentrates on the March date-book entries.

“On March 2, yes, I drove down to see Greco,” Pisano says, “and we had a leisurely dinner.”

“You told us yesterday you were in no rush, right?” “Yes.” “And that’s the truth, the whole truth, and nothing but the truth?”

“Yes.” “Then what is this appointment for 7:00 p.m., with Troviatta?” “Just a tax appointment. Early March is income tax time, and I made many Sunday and night appointments to service all my tax clients.” “What is Troviatta’s first name? Where does he live?” “I don’t remember. I don’t even think I do their taxes anymore.” Stewart remembers. He says Pisano was thirty-five miles away from Greco’s pizzeria that night, in the heart of Manhattan, at Lincoln Center, at the opera. Pisano emphatically denies this. He has only been to Lincoln Center once in his life, to hear Pavarotti. “Are you an opera fan?” “Nope. Only been to one opera in my life, when I was in high school.” Stewart shows the witness, and the jury, the Sunday-evening newspaper opera

His witness’s tax client is named Troviatta—with two t’s.” “And the advertisement for the opera is spelled T-R-A-V-I-A-T-A, right?”Stewart asks. “No. It’s La Traviata,” says Pisano gamely. “La Traviata?” “Right. I don’t see the comparison to Troviatta.” “Except for the time. That’s a coincidence. Isn’t it?” Pisano agrees, and Stewart directs him to look at the entry for two Sundays ahead, March 16, at one in the afternoon. “Are you referring to Carmen? Carmen Sangari, who I no longer do?” “Carmen Sangari?” Stewart produces the New York Times, and asks him to read aloud the opera listing for that Sunday afternoon. Pisano looks, and agrees that this is truly an amazing coincidence.

Spectators have begun to giggle. But Stewart is not finished. He directs the wit- ness’s attention to his diary entry for the following Sunday at 7:00 p.m. “Is that a tax client of yours?”

The giggling turns to guffaws. The notebook says, “Barber of Seville.”

This cross illustrates that no matter which way the witness responds, the cross-examiner wins when the question require that the witness concede the truth or suffer the consequences. 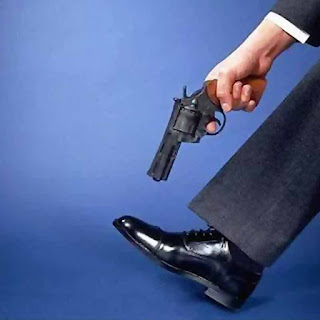 The following is a courtroom cross-examination exchange between a defense attorney and a farmer with a bodily injury claim. It came from a Houston, Texas insurance agent.
Q: "At the scene of the accident, did you tell the constable you had never felt better in your life?"
A: "That's right."
Q: "Well, then, how is it that you are now claiming you were seriously injured when my client's auto hit your wagon?"
A: "When the constable arrived, he went over to my horse, who had a broken leg, and shot him. Then he went over to Rover, my dog, who was all banged up, and shot him. When he asked me how I felt, I just thought under the circumstances, it was a wise choice of words to say I've never felt better in my life."
Posted by Ronald H. Clark at 4:51 PM No comments:

Length of a Cross-Examination