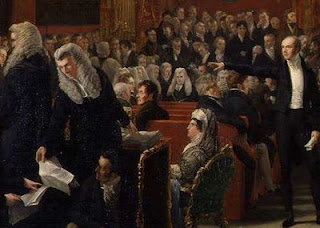 The divorce case of Queen Caroline, heard in 1820 by the House of Lords (pictured here), is a landmark case for a number of reasons, not the least of which was the fact that the trial had major implications not only for legal procedure but also for the continued existence of the Royal Family in England. At the time it was feared that the wrong verdict might plunge the country into civil war.
It seems that misbehavior in the Royal Family is not a modern phenomenon. It goes back at least as far King George III’s eldest son, who eventually became George IV. The younger George’s sexual escapades and other sundry misbehaviors are the stuff of legend. He entered into an arranged marriage with Princess Caroline of Brunswick and hated her from the moment he laid eyes on her.
After ascending to the throne, George IV decided he would be able to rid himself of his wife by charging her with adultery on the bought-and-paid-for-testimony of fired servants and other enemies of the Queen. His chances of winning looked rather good, because two of the five judges sitting on his case were his brothers. The trial provoked massive demonstrations by the London mob in support of the Queen, and she was ably defended by Lord Brougham, a barrister who was a masterful cross examiner and also a powerful orator.
A livery servant named Majocchi was one of the key witnesses against Queen Caroline. Majocchi testified that he witnessed the queen’s adulterous behavior during a sea voyage she took to Palestine. The key portion of his direct examination went like this:

Q: Did anybody sleep under the same tent?
A: Bartolomo Bergami [the queen’s alleged paramour].

Q: Did this take place every night?
A: Every night.

The cross-examination centered upon other details relating to the sleeping arrangements on the voyage.

Q: [On this voyage] where did Hieronimus sleep in general?
A: I do not recollect.

Q: Where did Mr. Howman sleep?
A: I do not recollect.

Q: Where did William Austin sleep?
A: I do not remember.

Q: Where did Camera sleep?
A: I do not know where he slept.

Q: Where did the maids sleep?
A: I do not know.

Q: Did you not, when you were ill during the voyage, sleep below [in the hold] under the deck?
A: Under the deck.

Q: Did those excellent sailors always remain below in the hold with you?
A: This I cannot remember if they slept in the hold during the nighttime or went up.

Q: Who slept in the place where you used to sleep down below in the hold?
A: I know very well that I slept there, but I do not remember who else.

Q: Where did the livery servants of the suite sleep?
A: This I do not remember.

Q: Were you not yourself a livery servant?
A: Yes.

Q: Where did the Padroni of the vessel sleep?
A: I do not know.

Q: When her Royal Highness was going by sea on her voyage from Sicily to Tunis, where did she sleep?
A: This I cannot remember.

Q: When she was afterwards going from Tunis to Constantinople on board the ship, where did Her Royal Highness sleep?
A: This I do not remember.

Q: When she was going from Constantinople to the Holy Land on board the ship, where did she sleep then?
A: I do not remember.

Q: Where did Bergami sleep on those three voyages of which you have just been speaking?
A: This I do not know.

With witnesses of this sort, as well as with alibi witnesses, cross-examination to collateral matters can often prove an effective means of demonstrating the very convenient nature of such witnesses’ memories. A devastating line of questioning like this during a deposition can quite often persuade opposing counsel to decide it would be better if the jury never heard the witness.