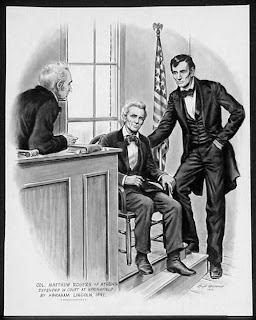 Lincoln has justly been celebrated for discrediting the witness in this fashion, but history has almost completely forgotten that the almanac was not the only thing that Lincoln used to discredit the witness. The witness said he saw Lincoln’s client strike the victim with a slungshot, and Lincoln had him demonstrate how Armstrong struck the victim. Allen demonstrated an overhead downward swing of the arm somewhat similar an overhead swing of a club or mace. Lincoln had Allen demonstrate this motion several times until he had imprinted that motion firmly in the minds of the jurors. Why? What purpose could possibly be served by having the witness demonstrate again and again the savage blow that took a man’s life?

Most modern readers will probably not know what a slungshot is, much less how to use one. It is a small, heavy weight on the end of a cord or flexible handle. In the hands of a man who knows how to use it, a slungshot can inflict grievous bodily injury. A slungshot had been found near the scene of the attack, and the prosecution had placed it in evidence claiming that it was the murder weapon. The slungshot had been made by a man named Nelson Watkins. Lincoln called him to the witness stand to identify the slungshot as his and also to testify that at the time of the murder, the slungshot was in his pocket and could not have been used to commit the crime. After the fight Watkins, who was drunk, crawled under a wagon to sleep, took the slungshot out of his pocket because it wasn’t comfortable, and forgot to retrieve it the next morning when he left the camp and went home.

Although no history records this fact, it is highly likely that Lincoln had Watkins demonstrate the proper way to strike with a slungshot. A heavy weight on the end of a rope cannot safely be swung like a club. It can be whirled like the sling David used to kill Goliath, or it can be snapped like a whip, but if you try to strike with it as though it were a club, you are likely to injure yourself. Lincoln had Allen demonstrate and re-demonstrate the motion because he planned to call a witness who could show that slungshots are not used with the striking motion Allen described. After winning an acquittal for Armstrong, Lincoln told Armstrong’s family that the testimony of Watkins was every bit as important to winning the case as the almanac had been.

The cross-examination technique used by Lincoln has been called the “Missouri method” of cross-examination. Missouri is the “show me” state, and the technique calls for having the witness show how some important activity was done. If you can show on rebuttal that the activity demonstrated was either impossible or highly improbable, you have dealt a serious blow to the witness’s credibility. Sometimes the impeachment is self-executing when the witness either cannot make the demonstration or makes himself look like a fool trying to demonstrate.