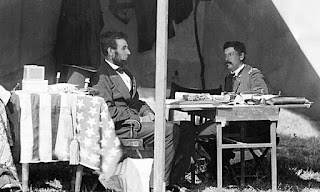 At an early stage of the Civil War it became apparent that President Lincoln and General George B. McClellan did not see eye to eye on the conduct of the war. Lincoln wanted McClellan to take his army (the largest in the world at that time) and make a direct attack upon the Confederacy.  McClellan wanted to take his time to prepare for a roundabout attack.

On February 3, 1863 Lincoln sent McClellan a letter summarizing their differences and asking five questions. In accordance with the cross-examination maxim to never ask a question when you don’t know the answer, Lincoln believed that he already knew the short answers to each of these questions. He hoped by his letter to cause McClellan to shake off his lethargy and get moving directly at the enemy. Lincoln’s letter [with the obvious answers inserted in brackets] is set forth below:

My dear Sir: You and I have distinct, and different plans for a movement of the Army of the Potomac---yours to be down the Chesapeake, up the Rappahannock to Urbana, and across land to the terminus of the Railroad on the York River---, mine to move directly to a point on the Railroad South West of Manassas.

If you will give me satisfactory answers to the following questions, I shall gladly yield my plan to yours.

1st. Does not your plan involve a greatly larger expenditure of time, and money than mine? [Yes.]

2nd. Wherein is a victory more certain by your plan than mine? [Nowhere.]

3rd. Wherein is a victory more valuable by your plan than mine? [Nowhere.]

4th. In fact, would it not be less valuable, in this, that it would break no great line of the enemie's communications, while mine would? [It would.]

5th. In case of disaster, would not a safe retreat be more difficult by your plan than by mine? [It would.]

The elephant in the room was the fact that McClellan’s plan would strip Washington of its defenses and expose it to a direct attack from the Confederates.

When a witness under cross-examination believes that the short answer to a question will be harmful, the witness will engage in any number of evasive techniques, one of which is to give a long, self-serving dissertation which camouflages the lack of a direct response in a torrent of words. This may or may not have been McClellan’s objective when he answered the questions, but his lengthy response [reproduced at 5 Complete Works of Abraham Lincoln pp. 121-124] did fail to give direct answers to the questions.

Unfortunately for Lincoln’s plan, he was in the war room, not in the courtroom. Although he probably would have been able to get a jury to agree with him he was unable to goad McClellan into direct action.