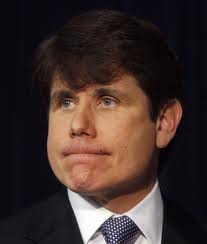 Ex-Governor’s Evasions Apparent During Cross-Examination
On June 27, 2011, former Illinois Governor Rod Blagojevich was convicted of 17 of 20 public corruption counts. The ten wire fraud counts carry maximum penalties of 20 years each. The convictions can be attributed to great degree to an effective cross-examination by Assistant United States Attorney Reid Schar.

Prosecutor Schar was faced with a rather unique situation. Witness Blagojevich talked over Schar. He demanded more detailed questions. On occasion, all three of his lawyers objected. So far not that unusual. However, when Blagojevich, a former Cook County Assistant State’s Attorney, didn’t like the question, he objected –“asked and answered.” When the defendant Blagojevich’s lawyer objected, Blagojevich answered the question anyway, ignoring his lawyer. Judge James Zagel also began ignoring his lawyers, and his lawyers asked for rulings despite being ignored by their client. Judge Zagel responded that Blagojevich was acting as his own attorney. Now, that’s chaos.

Schar asked narrow questions. But, these were met with Blagojevich’s rambling answers designed to explain his actions. The prosecutor resorted to the last-ditch technique for compelling a witness to give a direct response; he demanded a “yes” or “no” response to his questions. As he should have expected, the witness responded that the questions could not be answered either “yes” or “no” because it was unclear or called for an explanation. Schar would have been served well by the techniques discussed in Cross-Examination Handbook for dealing with the evasive witness. Those techniques both highlight fact that the witness is being evasive but also put the witness in the position of having to answer the question or suffer the distain of the jurors.

Nevertheless, it was apparent that Blagojevich was determined to have it his way. He was patently evasive. He wanted to avoid the direct questions and explain away his words and conduct. Sometimes when the cross-examiner is unable to control the witness, as Schar could not much of the time, the cross can nevertheless be very effective if it is obvious that the witness is deliberately avoiding the hard questions. The jury was not impressed by the ex-Governor’s evasions and untruthful answers.
Posted by Ronald H. Clark at 11:27 AM