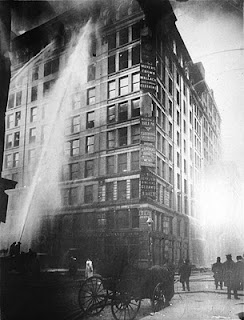 The Tragic Disaster, the Labor Advancements and a Cross-Examination

Tomorrow, Friday March 25, 2011 marks the 100th anniversary of the worst disaster in New York before 9/11. On March 21, 1911, in Manhattan a fire broke out on the eighth floor of the Triangle Waist Company, New York’s largest blouse factory. 146 garment workers died, either in the fire itself or in jumping from the windows.

The public was outraged. The disaster caused the labor movement to grow and led to work place safety standards, the minimum wage and the New Deal. Thirty six statutes were passed setting factory safety standards.

New York Times have covered the anniversary and HBO is showing a short documentary on the disaster. Also, at the end of this page is a video of former New York Senator and President of the Triangle Fire Memorial Association President Serphim Maltese discussing the fire and its aftermath.

The District Attorney filed manslaughter charges against the owners, who escaped from the roof. The allegation was that there was a practice of locking the exit doors to prevent unauthorized breaks by the factory workers and that the workers were unable to escape. The owners hired the best defense lawyer money could buy to represent them – Max D. Steuer. In Triangle: The Fire that Changed America, David Von Drehle, pp. 222-23 (Grove Press 2003) describes just how effective a move this was:

"his reputation (was) such that a man would pay an enormous retainer simply to ensure that … Steuer would not help his heirs challenge his will…(one) jurist…(called him) the “greatest trial lawyer of our time.”

The account of Steuer’s cross-examination prowess and the techniques that he used are explored in Cross-Examination Handbook. The owners were acquitted by the all male jury in less than two hours. The acquittal was attributed mostly to Steuer's cross-examination of the prosecution's last witness - a factory worker, whom Steuer got to repeat her story like a memorized script. In 1913, a civil suit resulted in $75 compensation for each deceased victim.
Posted by Ronald H. Clark at 11:06 AM