YOU KNOW YOUR CROSS-EXAMINATION WAS EFFECTIVE WHEN . . . 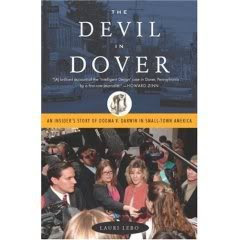 This is the second discussion of the Dover trial in which the parents of children in the Dover, Pennsylvania school district sued to prevent the school board from introducing creationism into the curriculum under the guise of intelligent design. For Part One, click here. A comprehensive account of the Dover case was written by journalist Lauri Lebo in The Devil in Dover: An Insider’s Story of Dogma v. Darwin in Small Town America (The New Press 2008). The first post on the Dover case noted that like the Scopes trial, which by contrast involved the prosecution of a football coach for teaching evolution, the pivotal points were effective examinations of adverse witnesses. In the Scopes trial, it was Clarence Darrow’s examination of adverse witness William Jennings Bryan, and in the Dover bench trial, they were the cross-examinations of the board members.

Plaintiffs’ attorney Steve Harvey cross-examined board member Alan Bonsell about a donation of sixty copies of Pandas and People, an intelligent design text, to the school district. Prior to cross-examining Bonsell, Harvey had established the chain of events that led to the receipt of the books by the district. A fellow board member Bill Buckingham had solicited $850 from his church congregation, which he then put in his bank account. Buckingham then cut a check for that amount to Alan Bonsell’s father who then anonymously donated the books to the school district.

In his concession-seeking cross, Harvey began by having Bonsell admit that when asked about the donation of the books during his deposition, he never revealed he had received the check from Buckingham. Harvey read from the deposition Bonsell’s initial denials that he knew who donated and eventually his admission that his father had donated the books. And then Harvey extracted the admission from Bonsell that during the deposition he never mentioned anything about Buckingham giving him the $850 check.

You know your cross is effective when the judge takes over and skewers the witness. Journalist Lebo provides the full description of Judge Jones’ undressing Buckingham. Here is a taste of the Judge’s examination in a few excerpts from the book:

"As Jones listened, his expression grew darker. At the conclusion of the day’s testimony, he said he had a few questions of his own. He demanded to see the transcripts of Bonsell’s deposition. Harvey offered to provide a clean copy – his version was marked up with notes – later in chambers. 'I want it now, if you have it,' Jones said. 'Hand it up.'

". . . Finally, Jones looked up. 'When did you first become aware of the fact that your father was in possession of the $850 that was being donated to buy Of Pandas and People?' Jones asked.
'Well, Mr. Buckingham gave the check to me to pass to my father. He said this was money that he collected for donations to the book. So I gave it to him,' Bonsell said.
". . . Jones persisted. 'The specific question was asked to you, sir: You have never spoken to anyone-anybody else who was involved with the donation? And your answer was, I don’t know the other people. That didn’t say, who donated? That said, who was involved with the donation?' Jones said, 'Now you tell me why you didn’t say, Mr. Buckingham’s name.'
". . . By the time he (Judge Jones) was done with him, Bonsell was flapping his hands and stammering."

This interrogation was not the end for the judge. Lebo reports:

"Jones was under no delusion that no one had ever before lied in his courtroom. But there was a brazenness to what he had witnessed. He couldn’t ignore what Buckingham and Bonsell had done, he said. After he grilled Bonsell, Jones gathered copies of school board member’s depositions and court transcripts. He sent the information down to the federal courthouse’s second floor to the U.S. Attorney’s office with the recommendation that it investigate Dover’s school board members for perjury."

The Dover case illustrates how an effective concession-seeking cross in a bench trial can so reveal a witness’s exaggeration and misrepresentation that the judge feels compelled to make sure the truth will out and justice will be done.
Posted by Ronald H. Clark at 2:37 PM