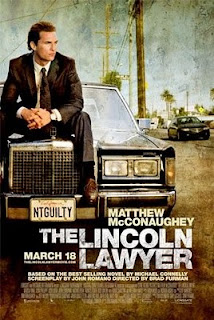 If It’s Too Good To Be True, It Probably Is.

Nothing makes a point stick like a good illustration, particularly a good movie clip. The Lincoln Lawyer, now in theaters, is a good thriller, and it has a courtroom scene that can teach law students and inexperienced trial lawyers and remind veterans to be wary of traps laid on direct.

This scene in the movie is from The Lincoln Lawyer, (Grand Central Publishing 2005) by Michael Connelly. The story features Mickey Haller, criminal defense lawyer, whose office is a Lincoln Town Car. He practices law in Los Angeles. Haller’s main client in the story is Louis Ross Roulet who is charged with attacking a woman. A knife was found at the scene and the victim claims that Roulet put a knife to her neck.

Haller calls the defendant’s mother, Mrs. Windsor to testify, and she identifies her son’s knife and says that he carried it for four years to protect himself when he was showing houses as a real estate agent. Mrs. Windsor testifies that although her son had never been harmed, he knew a woman who had been raped and robbed by a man with a knife, and that experience caused him to always the carry knife.

Connelly writing in the first person as Haller describes the scene: “. . . She (Mrs. Windsor) had succinctly delivered to the jury the explanation for the knife, yet she had also left in her testimony a minefield that Minton (the prosecutor) would have to cross. Her direct testimony had covered no more than I had provided in a discovery summary. If he strayed from it, he would quickly hear the deadly click under his foot.”

On cross, Mrs. Windsor testified, “It happened June ninth two thousand and one.”
“’You’re sure?’
“’Absolutely.’”
“I turned in my seat so I could more fully see Minton’s face. I was reading him. He thought he had something. Windsor’s exact memory of a date was obvious indication of planted testimony. He was excited. I could tell.”

Here’s the lesson for trial lawyers and aspiring trial lawyers: If it’s too good to be true, it probably is. How could anyone remember a date four years ago? It must be untrue and she is impeachable. What happens next is a reminder that opposing counsel may have laid a trap and that interrogatory questions – who or how – should be avoided in most situations. The scene continues:

“Minton: ‘Was there a newspaper story about this supposed attack on a fellow realtor?’
“’No there wasn’t.
“’Was there a police investigation?’
“’No there wasn’t.
“’And yet you know the exact date. How is it that, Mrs. Windsor? Were you given this date before testifying here?’
“’No. I know the date because I will never forget the day I was attacked.’”
“She waited a moment. I saw at least three of the jurors open their mouths silently. Minton did the same. I could almost hear the click.”