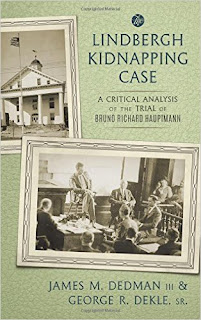 Talbot Publishing recently released my co-author Bob Dekle’s book entitled Lindbergh Kidnapping Case: A Critical Analysis of the Trial of Bruno Richard Hauptmann.  Although the Lindbergh kidnapping case has been written about innumerable times, never before has the trial of Bruno Richard Hauptmann been meticulously researched and analyzed. Bob and his co-author Jim Dedman have done just that.

Lindbergh Kidnapping Case is instructive on how to conduct a cross-examination. For instance, one of the prosecution witnesses at the Hauptman trial was John Conlon, an interloper who was involved in the negotiations over the ransom. This is how the book assesses defense counsel’s strategy in cross-examining Conlon:

Reilly adopted the wrong strategy for the examination of Condon. Instead of attacking the implausibility of Condon’s testimony, he attacked Condon personally. What Reilly succeeded in doing by aggressive verbal sparring with Condon was to highlight Condon’s wit in repartee, which in turn masked the implausibility of his testimony. . .
Rather than merely criticizing the strategy, the book recommends effective techniques that could be utilized as follows:
Reilly should have attacked the plausibility of the testimony, not the personality of the testifier. Snide remarks and personal assaults proved counterproductive and resulted in this portion of the cross-examination being diverted down a rabbit trail of arguing over the meaning of words. He would have done better by asking a line of tight and controlling single-fact questions. Such a line of questioning might have gone thus:
Q: You attended a lineup at the Greenwich Street police station in New York?
A: Yes.
Reilly should expect Condon to append a verbal barrage to his affirmation, but he should not take the bait. Rather he must relentlessly pursue the non-identification.
Q: The police asked you if anyone appearing in the lineup was the John whom you met in the cemetery?
A: Yes.
Q: Bruno Richard Hauptmann was in the lineup?
A: Yes.
Q: At that time you did not identify Mr. Hauptmann as John?
A: I identified Mr. Hauptmann at that time but I made no declaration of identification.
The Lindbergh Kidnapping Case is the perfect read for anyone interested in the Lindbergh case, an insightful telling of the story of the Hauptman trial, and a superb tutorial on trial strategies and techniques with illustrations from this famous case.