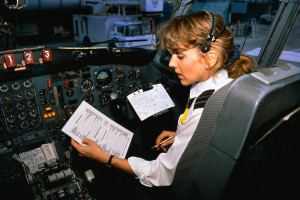 Checklists are critical to a winning cross-examination. To illustrate the importance of checklists, Dr. Atul Gawande tells the true story of an October 30, 1935 airplane flight competition that the U.S. Army Air Corps held at Wright Air Field in Dayton Ohio to determine which military-long range bomber to purchase. Boeing’s “flying fortress” was the likely winner. But, after the plane reached three hundred feet, it stalled, turned on its one wing and crashed, killing its pilot and another member of its five-person crew. The pilot had forgotten to release a new locking mechanism on the elevator and rudder controls. The plane was dubbed “too much airplane for one man to fly.”

Nevertheless, a few of the Boeing planes were purchased, and a group of test pilots considered what to do. They decided that the solution was a simple pilot’s checklist. With the checklist in use, pilots flew the B-17 1.8 million miles without an accident. Dr. Gawande in his book The Checklist Manifesto: How to Get Things Right (p. 34) concludes, “Much of our work today has entered its own B-17 phase. Substantial parts of what software designers, financial managers, firefighters, police officers, lawyers, and most certainly clinicians do are now too complex for them to carry out reliably from memory alone. Multiple fields, in other words, have become too much airplane for one person to fly.”

Dr. Gawande who heads the World Health Organization’s Safe Surgery Saves Lives program recounts that after the World Health Organization introduced the use of checklists for surgeons, research of nearly 4000 patients showed the following: major complications fell 36 percent; deaths fell 45 percent; infections fell almost 50 percent. Rather than the expected 435 patients expected to develop complications, only 277 did. The checklist spared 150 patients from harm and they spared 27 of those 150 from death. (The Checklist Manifesto, p. 154)

Just as checklists are critical for pilots and doctors, they are necessary for cross-examiners as well. At the end of almost every chapter in Cross-Examination Handbook:Persuasion, Strategies and Techniques 2nd Edition is a checklist of matters that are essential to effective cross-examination. The following is an example of a checklist that follows the chapter in Cross-Examination Handbook that focuses on exposing the false or exaggerated nature of what the witness reports on the stand.
Checklist: Impeachment Cross: Report