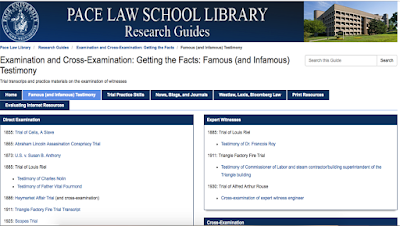 An example of what the Pace Law School webpage has to offer is the British commentary of Solicitor Anthony Wooding (hence defence rather than defense and criticised vs. criticized) along with the transcript of the cross-examination of an expert witness in the 1930 trial of Arthur Rouse by Queen’s Counsel Sir Norman Birkett. This is the commentary and transcript of the cross:

“The following is an extract from a famous cross examination of an expert witness engineer by Sir Norman Birkett QC of Alfred Arthur Rouse who was tried for murder in 1930. Sir Norman Birkett was prosecutor and at the height of his powers. Alfred Rouse was accused of murdering a passenger in a car by setting light to it. The defence was that it was an accident. Defence counsel called an expert witness who claimed 'a very vast experience as regards fires in motor cars' and who asserted that the fire was caused by the junction in the fuel line becoming loose. The witness gave his evidence with great confidence. Sir Norman Birkett then began his cross examination......”

A (Birkett): What is the coefficient of the expansion of brass?

S (The Expert): I beg your pardon?

A: Did you not catch the question?

S: I did not quite hear you

A: What is the coefficient of expansion of brass?

S: I am afraid I cannot answer that question off-hand

A: If you do not know, say so. What is the co-efficient of expansion of brass? What do I mean by the term?

S: You want to know what is the expansion of the metal under heat?

A: I asked you: what is the co-efficient of the expansion of brass? Do you know what it means?

S: Put it that way, probably I do not

A: You are an engineer?

A: Let me understand what you are. You are a doctor?

A: You are a crime investigator?

A: You are an amateur detective?

A: But an engineer?

A; What is the coefficient of the expansion of brass? You do not know?

S: No, not put that way
“This is a very powerful cross-examination technique. Although it has some flaws and is somewhat outmoded (see below) it still held as a classic teaching tool in law schools. The point is of course that it would have been difficult to challenge the witness directly on his conclusions without being something on an expert on car fires too, which Sir Norman was not. So Sir Norman goes instead for the jugular: the expert status itself. He also tightly controls the questioning, emphasizes it and directs it in such a way that the witness has nowhere to go.

“The cross-examination consists of a series of tightly paced 'closed' questions.
Today the repetition of the same point to give maximum drive to the same answer might be criticised as too crude (even as a 'jury technique'). The judge might well say 'Sir Norman, the witness has answered. let's move on'. Also there was of course a slight risk - a risk which Sir Norman probably considered but calculated as negligible having heard perhaps the too self-assured evidence in chief of the witness - that the expert did actually know the coefficient of expansion of brass, which would have destroyed the point. Maybe he had an immediate supplementary question should this have been the case.

“I did once see (in the Technology Court in Birmingham) an expert witness being comprehensively demolished on his expert credentials. Unfortunately for me, he was our witness. It was done very neatly but in a more subtle way. The other side had done their homework and found out that our expert chemist (the case was about the efficacy of a glue which had alleged failed causing gaps to appear in glazing: the glazing company was my client, the Defendant was the glue manufacturer) had previously published research and conclusions which were different from the ones he was now presented. A tough, truly confident and perhaps better prepared (rehearsed?) witness might have been able to stick to his guns and say, yes but I later saw that this research was wrong for xyz reasons and I reached opposite conclusions. But I think they calculated on the other side that he would be too taken aback by being reminded of his previous different conclusions that he would stumble. And he did. The other side's counsel I noted was made a QC soon afterwards.

“Whatever the pros and cons and indeed theatre of these cross-examination techniques one must not lose sight of the fact that their success or failure can have life or death consequences for a case. That was literally the case for poor Alfred Rouse. The defence expert witness was discredited. Alfred Rouse was found guilty of murder. His appeal failed and he was hanged at Bedford prison on 10th March 1931.”

This sample from the Pace Law School webpage is both enjoyable and educational. The lessons are timeless:
Don’t do battle on the expert’s turf; rather, go after the expert’s qualifications, basis for opinions and so on. Don’t ask open-ended  questions; rather ask short, closed-ended questions.