Catching the Truth on Cross-Examination 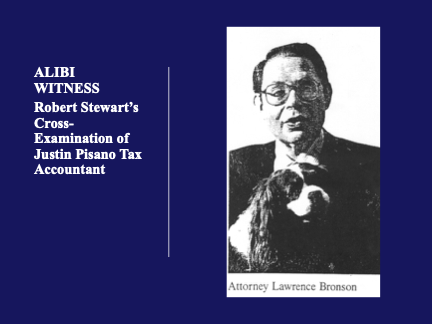 We are examining the THE FOUR Cs of CROSS-EXAMINATION as follows:

2nd – CONSTRUCTIONS – how to construct the cross – form of the questions. Transitions. Sequencing.

In the first post explained that the primary purpose of cross is to gain concessions that bolster your case theory or undercut your opposing party’s case theory. Impeachment is only a secondary purpose.   In the second post explored how the CONTENT of cross should be made up of concessions to the truth. You can design such a cross by asking: What must this witness concede or stamp the answer a lie, mistaken or ridiculous.

Now let’s travel back in time to a courtroom in New York. We’re in the District of Manhattan. The trial lasted from October 24, 1985 to March 2, 1987. It involved $ 1.65 billion heroin smuggling and money laundering, and the trafficking stretched from Sicily to Brooklyn to Brazil to small pizzarias in the Midwest. It was a MEGA TRIAL with 18 defendants.

Here is the courtroom layout showing where the players were positioned (the defendant Greco and his lawyer Larry Bronson can be seen in the last row at the bottom: 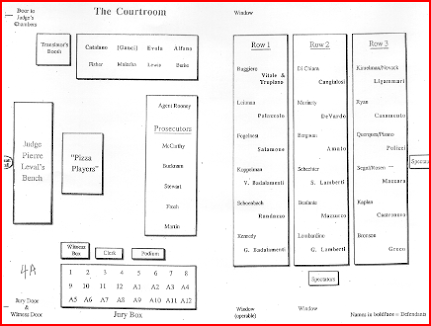 The following from Shana Alexander’s book – THE PIZZA CONNECTION – it’s January 1987 in the Manhattan courtroom:

Larry Bronson's defensive Sal Greco is focused on his client’s need to prove that he was not in a Bagneria farmhouse in early March 1980 watching the heroin quality control test. Bronson will show he was quietly busy at home in New Jersey. He calls Greco's good friend and tax accountant, Justin Pisano, a man who keeps detailed date books.

Under patient examination by Bronson, the witness goes through a precise accounting of driving to the Jersey Shore three Sundays in March to go over Greco’s accounts, and to visit nearby pizzerias with his client in order to compare their businesses with that of Greco's pizzeria in Neptune city.

On March 2, yes, I drove to see Greco, Pizano says and we had a leisurely dinner.

“You told us yesterday you were in no rush, right?”

“And that's the truth, the whole truth and nothing but the truth.”

“Then what is this appointment for 7:00 PM with Traviatta?

“Just a tax appointment early March as income tax time and I made many Sunday night appointments to serve my tax clients.

“What is Travis first name where does he live?

“I don't remember. I don't even think I do their taxes anymore.”

Stewart remembers. He says pizano was 35 miles away from Greco's pizzeria that night, in the heart of Manhattan, at Lincoln Center, at the opera.

Pisano emphatically denies this. He has only been to Lincoln Center once in his life, to hear Pavarotti.

“Nope. Only been to opera one opera in my life, when I was in high school.”

Stewart shows the witness, and the jury, the Sunday evening newspaper opera listings for March 2, 1980, at the New York State theater at Lincoln Center: La Traviata

Bronson objects. “Misleading the witness, Your Honor. His witness tax client is named Traviatta with - with two tts.

And the advertisement for the opera is spelled TRAVIATTA, right?” Stuart asks.

“No it's Traviata”, says Pisano gamely.

“Right, I don't see the comparison to Traviatta.”

“Except for the time. That's a coincidence, isn't it?”

Pisano agrees, and Stewart directs him to look at the entry for two Sundays ahead, March 16, at one in the afternoon.

“Are you referring to Carmen? Carmen Sangri, who I no longer do?”

“Carmen Sangari?” Stewart produces the New York Times, and asks him to read aloud the opera listings for that Sunday afternoon. Pisano looks, and agrees this is truly an amazing coincidence.

Spectators have begun to giggle. But Stewart is not finished. He directs the witness’s attention to his diary entry for the following Sunday at 7:00 PM. “Is this a tax client of yours?”

The giggling turns to guffaws. The notebook says “Barber of Seville.”

Over the laughter Pisano suddenly remembers that he had a girlfriend back then who was crazy about opera, and whose birthday was sometime in March, so “she picked three operas she wanted to see - but we never made any of them.”

“You just made that up, didn't you,” says Stewart, barely audible over the waves of laughter. Leval (the Judge) has turned Crimson. Stewart remains, as usual, absolutely poker faced, and as the good-natured Bronson, shaking with laughter, has lowered his head to his desk and tears are running down his cheeks.

Stewart caught the truth. Because Sal Greco wouldn’t concede he went to the opera, he stamped his answer ridiculous. The point is that either way the witness answers, the cross-examiner succeeds.

For a Professor's Review Copy go to this link -https://www.aspenpublishing.com/Cross_Examination_Handbook_2e 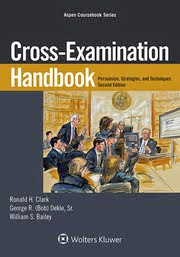 Full information and to purchase click on the book